Who doesn’t like to laugh? Movies have a way of making us forget reality for a few hours so that we can enjoy the works of other creative minds. There are so many movies to choose from, but one can never get tired of a good comedy, especially on those bad days where nothing goes right. So I’ve ranked a list of my top favorite funny YA movies. Spoiler alert! I give away plot points!

This was a well-deserved movie for my list. Emma Stone plays Olive, a high school student who inadvertently gets named the school tramp by lying about losing her virginity. Suddenly all the guys beg her to say she slept with them, and she agrees, but there’s always a cost. She gets bullied by her peers and goes through a lot, but the comedy was so funny it was hard to stay focused on anything else.

I must’ve watched this at least twenty times. I could never get enough of how funny it was and I found myself laughing at different parts each time I watched it. When their babysitter dies, Sue Ellen, the oldest of five kids decides to keep this information from her mother, who’s abroad. She gets a summer job to help take care of her siblings. She finds herself in over her head as things go wrong in a funny way.

I think the title speaks for itself. 17 year-old Mike makes a life-changing decision to marry his pregnant girlfriend instead of going to college and pursuing his career as a professional basketball player. Fast forward 20 years and he’s divorced and gets fired from his job. When he goes to visit his high school for old time’s sake, he has an encounter with a mysterious janitor who makes him 17 again. Things get funnier from there when he re-experiences high school a second time. 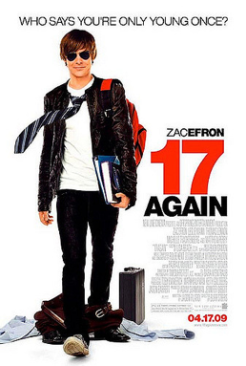 Who knew that playing hooky from school would be so fun? Ferris pulled off the ultimate task of skipping school for a day. He fooled his parents and the entire student body. Of course the Dean of Students, Mr. Rooney, wasn’t buying it, but it didn’t matter because Ferris spent an awesome day with his friends and got away with it. This classic movie never gets old.

These not so popular teens, Seth, Evan, and aptly named McLovin, think about nothing but girls and sex. But what makes it so funny is that they want to impress a couple of girls by going to a house party and bringing the alcohol. They hilariously go through great lengths to get the booze in hopes of getting lucky with the girls and staying out of trouble.

When 16 year-old Juno discovers she is pregnant by a longtime admirer, she decides to get an abortion, but quickly changes her mind. She endures the judgement of her peers all the while comically dealing with the craziness in her life. Ultimately, she carries the baby full-term and gives it up for adoption to the perfect lady. I love that she and her crush find peace with her decision and fall in love.

Cady Heron and her zoologist parents move back to the U.S. from Africa. For the first time in her life, Cady attends high school and meets two friends who show her the ropes and inform her about all of the cliques in the school. Of course they tell her that the mean girls of the school, “The Plastics” are a force, and that Cady should get close to them so that they can destroy the bullying clique Cady infiltrates the group, but has a little too much fun being included.

This classic movie has been out for a while, but I can literally watch it over and over. Being in high school is hard, but through the main character Cher’s eyes, it is hilariously funny. The way she handles dealing with friends, boys, and life in general, makes this my number one pick for funniest YA movie.

Shina James is the author of LIKE A DREAM and MONSTROUS TIES, which are both available on Amazon as well as multiple retailers. She is currently working on the final book in the LIKE A DREAM series, WAKING AMELIA and can't wait to share it with her readers. While residing in Texas, she loves spending time with her husband and two kids.
View all posts by shinaj1 →
This entry was posted in MOVIES!!, Uncategorized and tagged film, movie, teen, YA. Bookmark the permalink.